WHICH WAY IS UP?

We had 24 members attend our usual Thursday sewing meeting. It was a quiet news day. One highlight was the appearance of Judy and Iris on the front cover of the local newspaper, The Weekly Times. The article marked the Sesquicentenary of the Hunters Hill Public School and the presentation of a commemoration quilt made by HHQ to the School to mark its 150 year anniversary. This newspaper will go into a time capsule created by the School to be opened in 2070.

Sandy thanked members who had made stars and nine patches ready to be made into a quilt over the next few weeks. These blocks will go up on the design wall next week so that Grace and Sandy can finalise their positions into a very pretty and colourful quilt, which will be a likely candidate for one of the Sylvanvale quilts.

Sue and Alison did some culling of library books and a few of us rescued several of these books otherwise destined for recycling.

Iris had finished a partly sewn quilt top that had been donated to HHQ by a retiring member. Iris deftly modernised it and created a beautiful quilt that will go into the Community quilt pile or perhaps to Sylvanvale. The quilt did prompt some discussion as to which way is up. The picture below is one alternative! 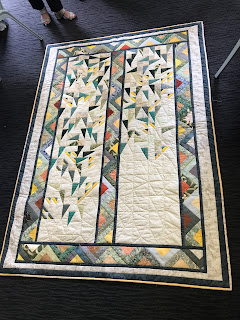 Caroline not only brought in another ten baby quilts, but also put together a wall hanging from a panel and Dresden plate blocks that she rescued from Val’s pile last week.

Helena led a hearty Happy Birthday chorus for one of the Debs whose birthday was on the day.

It was with sadness that we heard the news of the passing of life member Norma McMorran in August.