I went into the kitchen on Thursday to make a cup of tea. Felicity's carer was heating something in the microwave. She looked at me and said 'a nice group'. She used to belong to a group who crochet when she lived in Canberra and she misses it.

I was reflecting on my way home and thought how lucky we are to have such 'a nice group'. We are pretty terrific when you think about it!

It was so good to see Beryl this week. She looks good after all her trauma. She even managed to finish the Traditional quilt block by using stab stitch. Amazing! All done with her thumb with wire through it.

Thank you to everyone who made one of the Traditional blocks. They are all ready now to be put together. It is going to be a most beautiful quilt.

Felicity's husband works at Westmead hospital. He was present when Carolyn and the girls were displaying the kangaroo quilts we had given them. He was most impressed. The quilts were very well received.

Grace spoke about the NSW Guild's Friday Showcase. They always have an interesting speaker and many girls attend. Friday Showcase is held on the first Friday of each month except in June because of the Guild Show which is on from 19 - 23 June. Grace suggested that we get a group together one Friday and then have lunch in town. Sounds good.

I had a peek at some of the embroidered items that Elva, Joy and Helen are making to sell at our show next year. I spotted a number of things that I would like to buy. Elva is bursting with ideas. There seems no end to her imagination. Such clever ladies.

A number of us will be away now over the June/July period. Jenny will be in charge.  Don't get up to too much mischief!

Alison had a lot of Patons 5 ply Bluebell crepe wool. She crocheted a lovely rug/throw. Apparently the Bluebell is not made any more. I remember it well. Mum knitted a number of cardigans and jumpers for me with it. 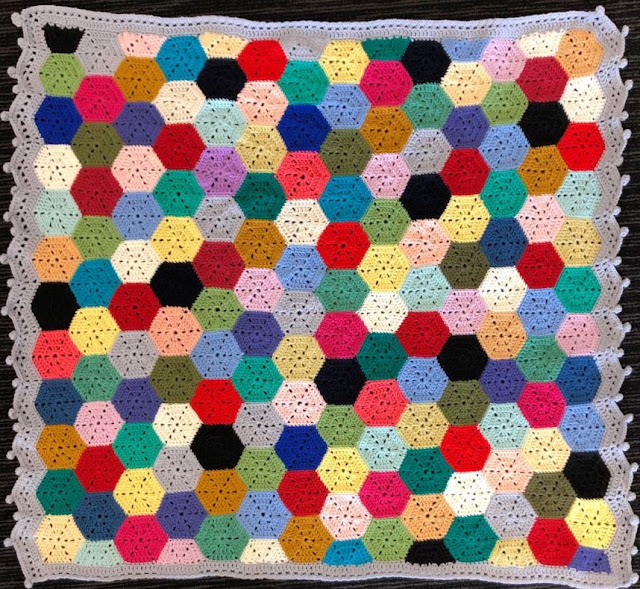 Sue St. has been doing quilling. She showed us this using two strips of ribbon. I apologise for over exposing it. The colours are red and blue.